Have you ever gone to Spain or to a Spanish-speaking country and wondered what is going on? Have you ever thought that you wished you had learned a language at school or paid more attention when you did? That’s certainly a story heard often in these quarters. Languages are a much bigger barrier for English people than in many other countries, because we are at an advantage of having been born to speak English. Unfortunately for English men and women, it means that we are less inclined to feel like we need a foreign language to be successful, whereas in other countries in Europe, schools are implementing English lessons far and wide. Many European schools now have a European section, or an English department that actually teaches curriculum topics in the foreign language, so pupils are actually learning to discuss topics in English and other languages whilst actually learning about them.

So, for the average person in England, they are quite behind in language learning compared to the rest of Europe in those comparisons. And with the explosion in family inclusion encouraged by education authorities and schools, the idea of learning a language as a family has become popular in parts of Bolton. Chris Abalain, licensee for LCF (Le Club Français/El Club Español, who have been established since 1985 in the UK), has tried to push the programme, by setting up family learning clubs in schools and halls in Bolton. “The simple premise is that parents have wanted to help their own children and encourage them to learn Spanish, so it was natural to try and put our kids Spanish Clubs together with the idea of learning as a family,” says Chris, “and the idea is very popular with the families who attend and it’s always surprising how much fun the adults have doing the games and activities, simply because they are having fun with their child.”

So you can give it a try – there is a Family Spanish Club in Westhoughton at the Communiversity, Central Drive, on Wednesdays at 6pm-7pm and you can have a free trial by signing up at this address: http://eepurl.com/orXuv or contacting Chris via http://www.boltonlanguages.co.uk or by phone on 07917 848745 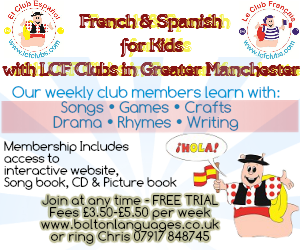 I am the founder and owner of Locally Socially!